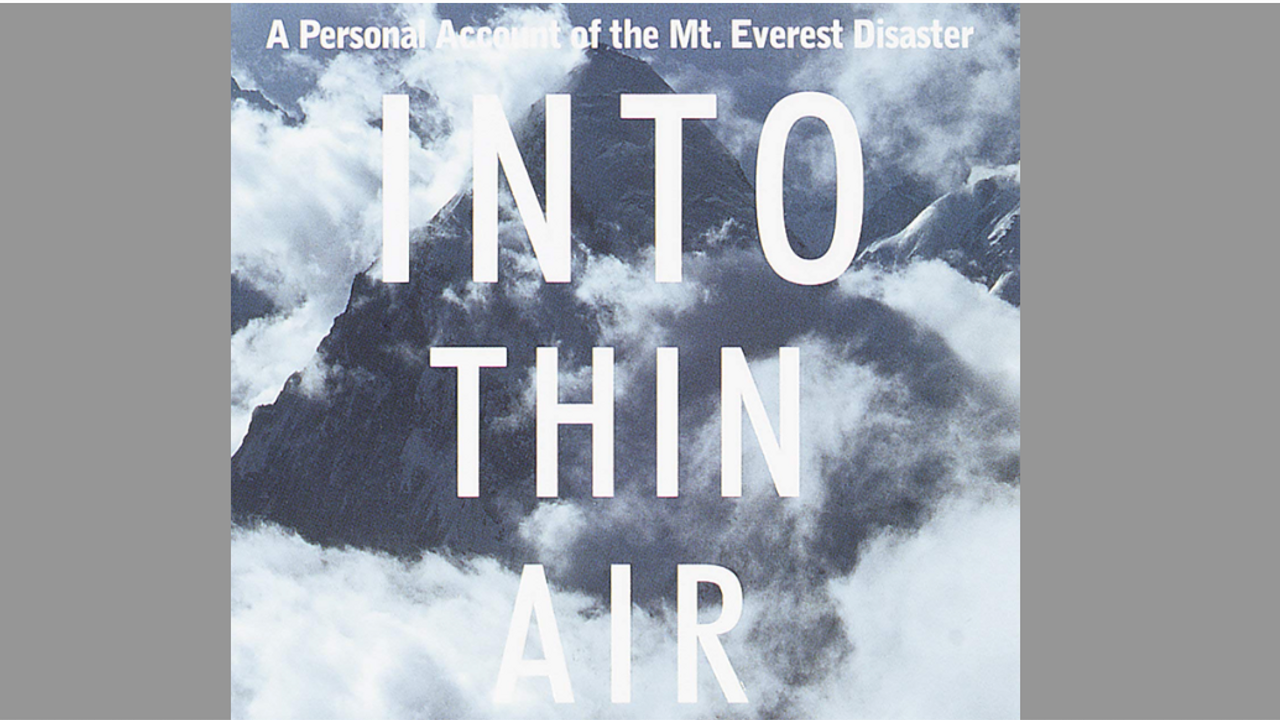 “Four hundred vertical feet above, where the summit was still washed in bright sunlight under an immaculate cobalt sky, my compadres dallied to memorialize their arrival at the apex of the planet, unfurling flags and snapping photos, using up precious ticks of the clock. None of them imagined that a horrible ordeal was drawing night. Nobody suspected that by the end of that long day, every minute would matter” (Krakauer, 11).

That’s how Jon Krakauer concludes the first paragraph of Into Thin Air, a memoir about the deadliest day (at the time) in Everest history. Krakauer is honest and direct as he recounts the harrowing journey and avoidable mistakes that resulted in the death of eight climbers in a single day.

Categorized as memoir as genre, Into Thin Air wrestles with when zealous drive becomes reckless ambition, the guilt of survival, and the consequences of living a life of adventure. How does Krakauer use characterization and thematic strategies to tell a story that remains culturally relevant 26 years post-publication? Read on.

Memoirs can be categorized in two ways: memoir as genre, or memoir as a strategy. Memoirs that fall into the memoir as genre category are autobiographical and tell a story over a distinct period of time, typically following a chronological narrative arc. The most successful memoirs as genrehave an exceptional story to tell, a story most people have not experienced or lived, a story like Into Thin Air. (Who can claim they’ve summited Everest and survived the deadliest climbing season of the time?)

At the time of its publication, Into Thin Air was one of the few books available for adrenaline junkies and outdoor enthusiasts who wanted to read about the deadliest day in Everest history. The unknown of the disaster (What exactly happened? Why did two experienced guides die? What happened to the bodies?) and international drama (involving a South African climbing team) kept this event in global news from the start of the climb to months after its conclusion.

Krakauer would release his own story in Outdoor Magazine, unknowingly misinforming readers on certain events, the most notable being the death of New Zealand guide Andy Harris. New information corrected Krakauer’s account and family members of those who died spoke out against Krakauer’s article. Into Thin Air served not only as means to provide a general account of what happened and what went wrong, but also to correct the misinformation Krakauer previously wrote.

Krakauer’s memoir of Everest is one of the most riveting adventure books and remains relevant because of the tragedy that often strikes Everest climbers even years later. Why does Into Thin Airremain as popular today (even when worst tragedies have hit Everest, most notably in 2014 and 2015)?

Because it provides a story relative to the popular discussion about the dangers of Everest’s commercialization. It’s the only book to consider, and partially blame, commercialization for the death of eight climbers.

The Importance of Cultural Relevance

According to literary agents, the most successful memoirs fit into a cultural zeitgeist. When Krakauer summited Everest in 1996, “the proliferation of commercial expeditions over the past decade was a touchy subject” (Krakauer, 26). To traditionalists, Everest had turned into a money-making scheme that encouraged the rich and inexperienced to tackle the mountain. Critics argued the increase in commercialization and lack of population control atop Everest would lead to tragedy.

The topic of commercialized climbing plays an important role in Into Thin Air. Krakauer makes two points about commercialization: it creates unfair treatment of Sherpas, and it allows inexperienced hikers to climb Everest. He argues there is a working disparity between Sherpas and wealthy business clients. In some cases, climbers treat Sherpas as servants rather than team members.

Krakauer also argues commercialization allows inexperienced hikers to climb Everest. Krakauer is quick to write about his three team members who used unworn mountaineering boots. He also observes that most of his team members had hardly climbed in the past year; though they were in Iron Man shape, he argues mountaineering requires more skillsets than a low resting heartrate and the ability to run a marathon (Krakauer, 79).

The 1996 tragedy reinvigorated the decade-long discussion about Everest’s commercialization. And as tragedy strikes Everest every few years, climbers return to the unanswered questions Krakauer raises in his memoir and the dangers of commercialized climbing.

If you’re writing a memoir that’s categorized as memoir as genre, cultural relevance will give it legs.

How to Introduce Your Characters

Characterization is an important aspect of storytelling—and how you introduce characters matters. In a memoir, writers have to provide a character’s background. This, if done poorly, can be boring, bog down your narrative, and remove people from the tension of your narrative arc.

In Into Thin Air, Krakauer introduces a cast of characters with pages of background. Rather than introducing the reader to each climber in the first chapter (an easy way to confuse and stall his reader), Krakauer presents his characters over time. The reader learns about new climbers all the way into thelatter half of the book. Through his pacing, Krakauer allows the audience time to breathe and get to know each character.

One of the best ways to introduce a character is through an action or event that demonstrates your character’s best or worst attributes. In chapter 2, Krakauer flies out to Nepal where he meets renowned guide Rob Hall for the first time. He also meets the rest of the team, but this chapter focuses solely on Hall and his background as an Everest guide.

This is the ideal moment to provide necessary information on Hall’s former accomplishments and his mountaineering wisdom. Krakauer also takes the time to establish Hall as a credible and respected guide. Why? Because Hall had summited Everest five times before 1996 and yet he still made the decision to forego safety procedures, like turning around at the agreed upon time, to summit Everest. It would be this decision that would trap him and his client and lead to both of their deaths. It proves that Everest’s lure can corrupt the most experienced, and low-oxygen can hinder the most knowledgeable of guides.

In another example, Krakauer introduces the reader to Sally Pittman, a socialite and Internet correspondent on Fischer’s team. Krakauer introduces Pittman in relation to a story about a Sherpa on Fischer’s team who’s evacuated from the mountain. Krakauer segues into Pittman’s story by remarking on the Sherpa’s evacuation and how people around the world were more updated on this story than those on Everest.

Another example: As he describes Base Camp and the respect Hall commanded, Krakauer introduces Scott Fischer, Hall’s business rival and another respected guide. In the midst of describing Hall’s respectable personality as the man everyone went to when problems arose, Krakauer comments that Hall shared his guiding wisdom with Fischer. This segues into Krakauer’s recount of Fischer’s character. He explains this is Fischer’s first time guiding a team to the top of Everest, while emphasizing Fischer’s experience in climbing and his close comradery with Hall.

The introduction of Fischer and Hall establishes a duality between the two guides. Hall is an experienced guide; Fischer is guiding his first team atop Everest. Hall maintains a strict watch over his climbers; Fischer encourages individual exploration. By introducing these two characters, Krakauer sets up themes—most notably themes of adventure, safety, and recklessness—that will crop up the remainder of the book.

Throughout Into Thin Air, Krakauer cleverly wrestles with difficult questions through the characters. There are a multitude of themes Krakauer writes about: adventure, determination, endurance, loyalty. He also compares thematic topics: passion vs. safety (living vs. surviving), selfishness vs. selflessness, guilt of survival vs. relief in survival, zeal vs. recklessness. One of the best ways to present themes is through the actions of your characters.

The most common theme explored throughout the memoir is the sense of adventure. Krakauer provides background information on avid climbers, like Hall, Fischer, Andy Harris, Pete and Klev Schoening, and more, to demonstrate a unique human desire for adventure. In addition to adventure, some of these climbers also represent ambition, determination, endurance, and zeal.

To the point of determination, Krakauer commends Frank Fischbeck, John Taske, Stuart Hutchison, and Lou Kasischke who turned around before reaching the summit. Krakauer comments, “…in order to succeed you must be exceedingly driven, but if you’re too driven you’re likely to die. Above 26,000 feet, moreover, the line between appropriate zeal and reckless summit fever becomes grievously thin. Thus the slopes of Everest are littered with corpses” (Krakauer, 186). It would be reckless summit fever that would lead to tragedy.

Later, Krakauer considers the thematic question of who should be allowed to climb Everest. In chapter 7, Krakauer talks about the Taiwanese and South African teams who would summit Everest on the same day as Rob Hall and Scott Fischer’s teams. Krakauer describes, in depth, the incompetence of both teams, reflecting on the Taiwanese team needing rescue from Mount Denali the year prior, as well as the South African team who had minimal alpine experience. (This characterization also relates to Krakauer’s main theme of questioning the commercialization of Everest.)

In an interesting comparison, and a thematic exploration of selflessness vs. selfishness, Krakauer describes the different responses from the South African team and the IMAX team in their attempts to rescue those trapped atop Everest. The IMAX team provided batteries for radios as well as oxygen tanks for those attempting to re-summit in order to try and save those who were stranded. Whereas the South African team refused to give up their radio batteries (which were desperately needed to remain in contact with those stranded); they refused to help. Put yourself in this situation. Do you risk your own life to save those of another team?

In his concluding chapter, Krakauer writes, “Everest seems to have poisoned many lives” (Krakauer, 299). Notice how Krakauer returns to his main theme—adventure. We, the reader, have seen the varying degrees of this theme throughout the book, from the adventurous spirit of a young man hiking mountains, to the dangers of unbridled adventure in the face of Everest.

As you conclude your memoir, look back at your theme. Have you developed your theme through varying stages? Does your theme make a statement? Does it leave your reader with questions they’ll ponder days later?